This is a continuation of this (the password is web).

The overriding message of it is this:

(Uniqueness: why should users visit your page? What do you have to offer, except yourself? Don’t copy – or if you do, copy uniquely).

Recently, Google streamlined their logo by removing its serifs.

Why? Well, there’s an idea currently in circulation that sans-serif typefaces are more legible when you’re reading online. In fact, this hasn’t been proven.

Then there’s another idea: that sans-serif fonts consume less processing power. I checked for myself by determining how much disk space is taken up by the same document when: (1) using the Calibri typeface (sans-serif); and (2) using Times New Roman (serif).

Observation: The Times New Roman document was about 27 per cent bigger.

Apparently, Google and like companies are making a push into the developing world (Facebook employees are holding 2G Tuesdays to get an idea of what it’s like to use the Internet in places like India).

So possibly this is the reasoning behind the new Google logo, to make it easier to load – or else that’s just the narrative they’re running: ‘See, India, Pakistan and Cambodia, we’re making ourselves more accessible just for you!’

Whatever. I think the logo would have ended up sans-serif sooner or later.

In the winds of change, currently blowing a gale, sans-serif typefaces are more aerodynamic…

And – serifs – jeez – they’re really ancient – holdovers from when when people used to carve letters into stone. It’s a wonder they haven’t browned and withered and dropped off long before now…

The message is: if you’re writing online, and it’s short-form stuff like this, use a sans-serif font.

One more point: If you’re trying to get fancy with your typefaces, don’t.

The received wisdom is that unless you’re a trained designer, never use more than two fonts, if that. (I’m not so sure about this: might be just a matter of fashion. For all that the Internet is a champagne tsunami of freedom and brilliance, there’s a conservative element that reacts reflexively and negatively when you break certain rules. This might be one of them).

A literary editor, of the rare, employed type, works by referring to their publisher’s style guide – a manual listing things like whether they’re using US or UK English, how certain terms are hyphenated, and whether or not the Oxford comma is used.

Similarly, online publishers produce their own guides. Check out this one from MailChimp.

The emphasis in these guides is on voice and tone.

Voice – is your brand’s personality and identity and is consistent.

Tone – adapts according to the context of the content.

Your voice doesn’t shift; your tone does, sympathetically, in the original sense of the word – that is, understanding another’s feelings. As the MailChimp guide advises, if you’re writing emails to someone who is celebrating a success, feel free to be funny; if they’re concerned about something, be straightforward and refrain from jokes.

But this too: from experience, experience is the best teacher. Best to run your early posts and articles by a supervisor to check that you’re conforming with the house style.

Boring writing goes unread, after all: not helpful for anyone.

Here are some Facebook posts I wrote for RMIT University Library: 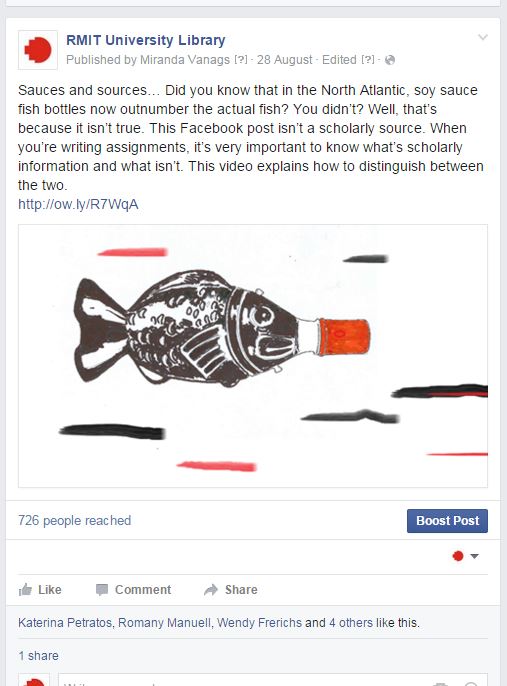 It’s a diagram that was originally made to remind journalists to lead with the most newsworthy stuff – to begin with the general and move to the particular – an inversion of a different sort for writers like me, used to working in the longform, where the writing is most engaging when it starts with the particular and moves to the general (this applies to TV interviews too – nothing more boring than someone who just spouts generalities on a talkshow).

Here’s an example of the use of the inverted pyramid.

a metaphor used by journalists and other writers to illustrate how information should be prioritized and structured in a text (e.g., a news report). It is a common method for writing news stories (and has adaptability to other kinds of texts, e.g., blogs and editorial columns). This is the best way to understand the basics about a news report. It is widely taught to mass communication and journalism students, and is systematically used in Anglophone media.